Senior disciple of The Dhananjayans, Smt. SubathraSudarshan organized and conducted Padha Pooja at her
Naatya Studio on Wedneseday June 29th 2013.

A great poet saint, Sri Madhava Muni says;" I am only aware of Guru's feet. I am ignorant of Yamas and Niyamas, the prescriptions and prohibitions of yoga, nor do I know any other method. I know only Guru's feet. Is it not foolish to prefer gold to the philosopher's stone? Similarly what is the use of renunciation of the Guru's feet?"

"A true disciple has no sadhana to perform. He has only to surrender himself completely to his guru"

Naatayaacharyas Shri V.P. Dhananjayan and Smt. Shanta Dhananjayan (The Dhananjayans) gracefully accepted the padha pooja performed to them by their disciples organized by their senior disciple Smt. Subathra Sudarshan. 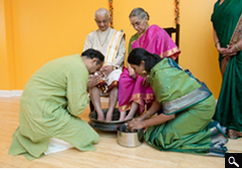 The event was also graced with the presence of Hema Ramanathan, a longtime friend of the The Dhananjayans. It was truly a special occasion where The Dhananjayans blessed the gathering of Bharathakala Naatya Academy's students and parents 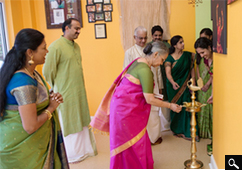 Subathra talked about her long association with her Gurus and their unconditional love and the lessons she learnt from them. She quoted Saint Kabir in her address," As I look at my Guru and Govinda, I question myself who do I prostrate to first.

And Saint Kabir says while both guru and gobind are worthy of worship my first salutations go to my Guru who showed me the path to reach the LOTUS FEET OF THE Lord ". 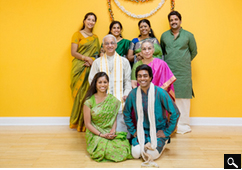 Anna spoke to the audience about the importance of practicing Naatya and impressed upon the parents to send their boys along with the girls to learn Naatya.

Naatya the essence of the Vedas is an art form which indulges not only the body but the mind and spirit as well and aids in the overall development of children. The padha pooja was followed by a dinner at Subathra's house with The Dhananjayans students and students of Bharathakala Naatya Academy.